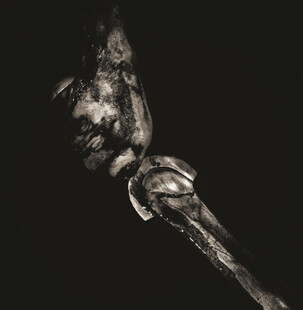 A towering two track release spread along twenty one minutes, this is an imposingly dark EP from Brisbane's Consummation, who feature members of Impetuous Ritual.

A composite of black and death metal, with the scales tipped more towards the former, this production sounds amazing, enough mire to appease the extreme metal gods, but without enough clarity to the sound to truly sense the atmospherics, a fog closing in around you. There's a reminder of Bölzer, multi-faceted, bold, loudly forraging forward, restlessly evolving multiple times within single tracks. This is all found within the eleven minutes of The Weightless Grip of Fire, constantly recharging itself, so even when close to its end you are gripped, again arrives a surge, all capped with dramatic ending. It's truly excellent.

Blighted Ovum is only fractionally shorter, a blizzard of black metal guitar, the vocals grimmer than before - edging close to Mayhem levels - before a drawn out, depressive bleakness. It descends into a whirlwind, spiralling inwards, closing out the light. It focusses on that struggle, rather than the mutliple riffs of the opener, ending with a couple of minutes of uncomfortable noise.

It's fine, but little more, and somewhat dampens the thrill of the what came before. For a two track release, that therefore acts as a limitation, but the quality is undoubted, and the evidence points to a band channeling all the right facets within the spectrum of extreme metal, formulating a sound that is both gratifying and distinct.