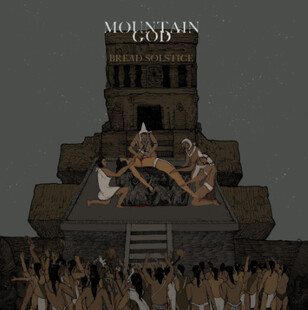 Brooklyn's Mountain God's harmonisation of doom and psyche is something to behold. While you can pick out the occasional simile in style and formula, Mountain God have constructed something compellingly different.

The trippy effects largely come across as though a wind across an icy wilderland, flowing and howling past your frostbitten ears. It transports the album to far off, barren lands, guiding your imagination there. The vocals add to this sense, flipping between whispered accompaniment and otherworldly, almost black metal gargle, as if transmitted through a portal from another planet. Within the eleven minutes of Nazca Lines, the leaden doom progresses slowly, never crushingly heavy, yet the unease created leaves you just as shaken by the experience. The passing into the second half is manipulated with grand, luscious advancement. Touches of Ufomammut's spaced ambient sludge, reminders of Rwake's ability to create menace without necessarily resorting to the amp shattering tones of their peers, a mysticism clouding the music.

The tracks, particularly from then on, never follow standard structures, vocals appearing inconsistently or not at all, long passages of heavily synth input atmospherics direct the travel. Occasionally there's purer moments of psychedelic experimentation, yet where flowers should grow, an ugliness blossoms with the bassy grimy rumble and hurtful spite of the vocals. There's a soundtrack quality to moments, particularly on Junglenaut, while the closing Hymn to Nothing brings it all together, the slightly off kilter approach to form and structure, that blend of majesty and despair, a mentality somewhere between those of Harvey Milk and Yob, without this sounding like either.

An album that should leave you bewildered, in need of air and a reality reset - strangely doesn't. In some ways that's a shame, it should shake you to your middle, and entrap you within the world created so as the ending serves as release, but that feeling never arrives. But then maybe that's because there is a fractious calm it wills you into beneath all the nervous energies within. And that contrast is one I'll take away, an album I can't tell whether I'll revisit often at all, but one that I've fully lived the experience of being absorbed by, a unique adventure, which is always something that deserves to be lauded.