The Death of Money Ghost Pains 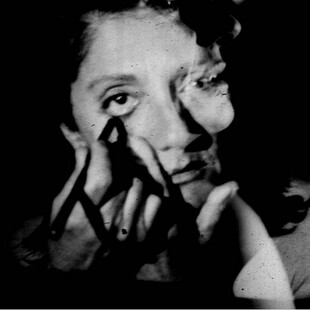 What can I honestly say about The Death of Money? That I love them like brothers, that I honestly miss the word 'Her' that once stood in their name like a puzzling sentence lifted from a trash novella? Nah, let's focus on the music.

Once a crushing and simplistic band intent on crushing the listener to dust with repetition and amp abuse, the trio who now span Manchester and Welsh origins have almost put their old moniker to the crypt. The new, leaner name comes with a more orchestrated and epic feel. Where before songs pounded away to hypnotic levels, the songs that form Ghost Pains have the spirit of the past but with a more considered and nuanced approach. The broad brushstrokes of their old sound are there underneath, but there's a finer painting of textures here, songs dip their toes in careful dynamics and the wash of effects makes it a captivating listen from the start.

There's hints within the songs that influences have been expanded over the years, the crushing bleakness is still omnipresent, but a softer edge to songs like the dreamy Wherever You Are belie record collections that could encompass Jesu and perhaps 80s pop alongside the Corrupted, My Bloody Valentine and Sleep. The aesthetic is still a sense of high emotion and that feeling of wading through treacle still pervades all told. This is being billed as the group's third full-length, but it does enough to throw off the shackles of the past 12 years.

The cleaner vocals that Kaskie has started to favour over his old screech add a sadness to the music that might have been missing before. The mournful Outside Emptiness drips with reverb and a sense of reverence to loss.

The title track acts as a centrepiece here, gently emerging like a winter sun, eventually exploding with cold light when the mood is right. The gentle strains it promises to begin with arch their back to appear bigger and when the payoff drops it's a strange, minor chord that hooks you in. It sounds huge, but with a sadness there too.

Ex-Swans oracle and all-round brilliant vocalist Jarboe appears on the short, but sweet Running Through Dreams which relies on an other-worldly haze and hue that recalls the more lucid moments of Echo & The Bunnymen at times. This flattened, grainy feel can be used as a great descriptor for the album as a whole. It's life through a blurred lens, a smudged image of watching yourself living. Halfway between dreams and a bleary-eyed reality. All beautiful, all the time.

Give it a listen, it's like plunging into warm water and floating.

Forums - Reviews and Articles - The Death of Money - Ghost Pains