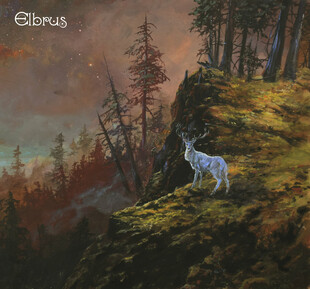 This is the sound of Australian stoner blues. Elbrus have a cool vibe going on here, interspersing the spaced sounds with varied, if familiar, back up instruments, to soundtrack a hypnotic episode, and calm the mood. They've recorded this live in the studio to give it that true feel, something you sense throughout. Kosmik Artifactz have wilfully picked up this debut for their wider reach and our pleasure.

The opening track, in retrospect, is my favourite. Tall Shadows ushers through with the mellowist of flow, complimentary dual male and female vocals, hints of Canned Heat or Pete Green. A tempo increase latter on is crude hard/stoner rock. Break the Machine flits between blues and heavier psych, with the to-the-fore harmonica ending a cool conclusion. The slightly eccentric animal lyrics of Eyes of the Mammal, and its heavier turns bring the first half to a satisfying close.

The second half is dominated by Far Away and Into Space parts 1 and 2. The first is a bit of a jam, the live recording evident, for better and worse - you can sense the reality but some definition is lost. The follow up is an eleven minute attempt at a heavy blues engagement. The addition of organ adds a nice variance, and the track is fine in itself, but instead of submerging you within its swirling prism of colour as I suspect is its aim, it leaves me a little cold. The activity, the energy never rising above a stirring is all fine in the lazy, hazy chill, but the excitment and individual imprint hitting similar ceilings is sadly less so. The uneventful Three Walls further marks the difference between the two halves.

My enjoyment of this album is evident - I've had this on a few times - but tempered by the big moments missing or falling flat. Where a great psych album keeps you captivated without notice or pre-determined engagement, the enchantment here is not unfaulteringly earned. Yet despite this, and with the first couple of tracks repeating as I type, it'd be wrong to give a critical review here - Elbrus have a talent and can certainly hit a groove, and the album (even if only the first half) is laced with a natural charm.