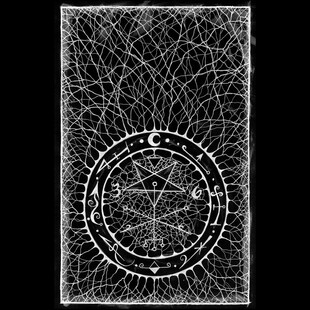 Sorguinaza are a mysterious band with little known, and little given away by their label Vault of Dried Bones. Not even their names nor location can be ascertained, only a promo picture of the duo looking suitably grim, bullet belts and flames all accustomarily accounted for. Yet this is a step above your bog standard black metal demo.

This three track debut contains a sound born from chaos, overwhelming, the strains of guitar are evident but layered upon by all manner of noise, scream and diseased filth. Buried beneath it all is defiant old school black metal. On I in particular, the fast pace belies a rare ability to marry the blistering savagery of old to this other-worldly experimentation. It emits a strange pulse, in perhaps a similar way that Portal do, albeit not sounding anything particularly alike, that you become unwittingly attuned to pretty quickly. The rawness inevitable to a black metal demo only compliments the atmosphere.

Out of the hundreds of unknown black metal demos and records released seemingly daily worldwide, the reasons why this one should garner special attention is that unhinged quality, not forced or theatrical, just a mind fuck heading towards Gnaw Their Tongues level derangement sitting atop a clutch of gnarly black riffs. A full length is due fairly soon, be scared and be prepared by checking in here, as this is truly engaging.