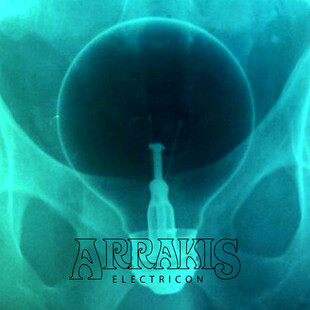 Three piece Arrakis play instrumental stoner rock. There are certain bands who will always be raised in press promos and reviews of such beasts. I'm not even going to name the obvious one here, as beyond lack of vocals and shared genre, there's little similiraty. But there are nods to other tropes of instrumental stoner reviewing - Monkey3 chief amongst them.

Five long tracks, all recorded live in an abandoned music hall over three days, there's a strong sense, whether a reality or just perceived, of free style improv interplay at hand. When it clicks it is engrossing, nods to Hotel Wrecking City Traders earlier material, a raw energy evident creating an unpredictability, tracks that change tack, evolve and lead in unexpected directions. The title track for example generates an emotional charge, a connection forged, the recording method lending the sense that you're at their gig, a noble attempt to capture the most engaging medium of accessing their true sound for those of us not able to see them play the clubs of their native Greece.

The recording method does backfire at times though. The rawness of the production occasionally detracting from phases that should be lush with psychish daubs of colour, or inflated by fuzzed riff, instead a rough approximation clunks forward. That balance is missed, and it's a shame, as tracks such as Plexus end up without enough happening to be a straight up stoner rock track nor the visionary exploration created by an expansive psychedelic trip.

The last couple of tracks attempt to address the concern, and pack several ideas into short phases, yet remain coherent and alluring, the closing Seed possibly the highlight of the whole album.

Electricon is a frustrating listen, but the positives far outweigh the grumbles. Arrakis have announced themselves here, a band with vast potential, and an addition to any must see live list.