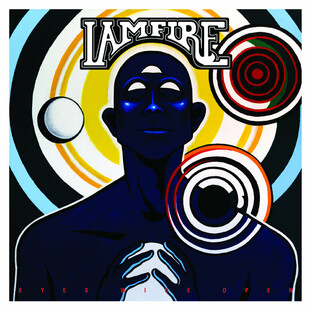 Remember early The Haunted from back in the day? ...Made Me Do It? Drunkenly flailing around to Hollow Ground in your local rock club? Well, turns out their original vocalist, Pete Dolving, now fronts a stoner band, IAmFire. Who'd have thought it?

Pretty damn good they are too, judging by this "EP". The title track is one half of the tracks here, a vaguely psychish film swaddling the atmosphere, fleshy riffs piercing through the fog. There's a slight mid-era Melvins crunch to give it bite.

The other half, Burn Your Halo is better still, pure stoner rock from a generation ago. Dolving's vocals shine here, adapting to the clarity afforded to a less metallic sound amazingly well. This adds up to something reminiscent of a bunch of the better but lesser-known bands of that scene - Biblical Proof of UFOs, Deville, Mammoth Volume, Spiritual Beggars perhaps (my mind now wandering; dreaming up stoner mixtapes; moving away from the review material at hand) - but without sourcing a direct channel back, maintaining a modern day relevance.

Two tracks long only, and it won't blow any minds, but never the less, this is a pretty cool snippet of a taster. What they lack in terms of a space bar, IAmFire certainly prosper in delivering a tune.