Art of Burning Water Between Life and Nowhere 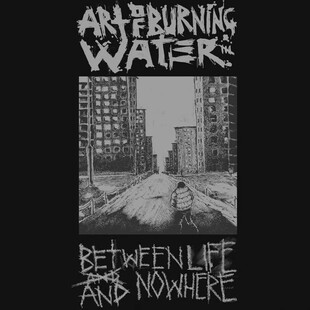 There's not too many bands that manage to retain a strong momentum of writing and release while maintaining their sense of purpose and integrity over a significant period. Art of Burning Water are one of the rare exceptions, a true gem of the British hardcore scene, consistently adding to a catalogue of work that, when they eventually call it a day, will be looked back on as underappreciated. Not that it seems that's coming any time soon, as theirs is a fire that appears to fuel from a bottomless well.

Between Life and Nowhere is noticeably direct, particularly in context of the band in question - I remember many years ago purchasing The Voyage of the Pessimistic Philsoph shortly after a mind shattering AOBW gig, only to be perplexed by the awkwardness of the record until it finally clicked. Not here - there's an immediacy without losing their ferocity, attacking with an unrelenting metallic punk vigour, a breathless crust-infested assault whilst still delivering a distinction for each track.

What's ultimately great about this album though is that it is defiantly, distinctly that of AOBW, existing in the centre of a Venn diagram of undergound consciousness to tempt in the fringes of metal, powerviolence, doom and hardcore, equally unafraid to piss on anyone who disagrees, and more so in terms of sheer quality - here is an album ten tracks long without pause, deviation or, most impressively, weakness. I could highlight the stunning opening of Rambo Surival Techniques and Prime Example of a Lonely Child, the sub half minute shriek of You or the guttural closing Kindness Is Strength but with the album over in twenty minutes, you're best just taking the full weight of it on straight through, ideally three times an hour.

Consistently intense, continually absorbing, Art of Burning Water burn as bright as ever.