The Kings of Frog Island IV 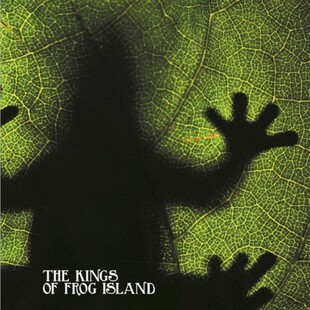 For all Leicester's internationally recognised feats in recent times - the Premier League; the car park King - everyone has overlooked surely the most impressive achievement that I've just invented having discovered it myself while reviewing this (and therefore leaving myself open to be completely shot down with examples disproving my theory). And that is, amongst the close knit environs of the roster of cult German psychedelic record label Elektrohasch, only four bands hail from Great Britain (The Kings of Frog Island among them), and all four are from Leicester. Jamie Vardy, Richard III, get to the back of the class.

Admittedly this is presumably due to a couple of common band member denominators, chief among them Josiah's Mat Bethancourt, previously of the 'Island but seemingly absent here. Gone too is the label imprint, these recordings left to gather dust for a few years and only now brushed off and pressed out by the impressive Kosmik Artifactz label.

These like minded hazy minded midlanders form a collective that pools together, releasing their talents nicely on to each record. IV is no different. The opening The Tenth Stone gives an immediate impression of stoner rock, before lush female vocals flow through, and layered multi-instruments realise a lavish ending to an appetising beginning. The format across the album is slightly unstructured, tracks of dazed tranquility and gentle rhythms (over which, for note, Macbeth is read on The King Is Dead).

This theme develops to an extent where the centuries old folk espoused by Crumbling Ghost is reminiscent, on Shadowlands and elsewhere. Where they apply more throttle and weight there's a distant calling of The Heads' fine work. And there's the ubiquitous psych glaze, a nod to why they fit so smoothly into their previous label's exclusive club alongside Colour Haze, Los Natas and the rest.

For only the lack of a bleeping synth or Moog here or there would this remind occasionally of the space rock sonics of the likes of Farflung, instead gravitated within the atmosphere for a more earthly adventure. The eleven minute closer Long Live the King reawakens the fleeting stoner rock echoes, daubed as it is in a direct Kyuss fuzz coating, before losing itself to IV's densest psych trip out, a fine ending all told.

An album with frequent passages of relaxation, occasionally traipsing the line between hypnotic bliss and uneventfulness, but largely there's a melodic charm that pervades, and jaunts through a range of psych styles and influences that keep it fresh and inviting. For whatever reason it has been mothballed for a few years, I'm thankful it has now seen the light of day.

Forums - Reviews and Articles - The Kings of Frog Island - IV