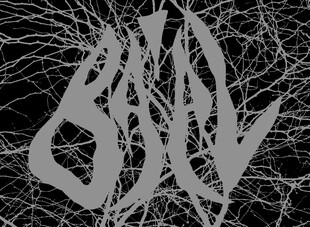 Ba'al have been one of those bands that have gained incredible amounts of attention very quickly. Easy to do in Sheffield when you're playing a genre as sparse as doom, but they are adding to what must be the best arsenal of this style of music the city has had in a while.

Layered, heavy and spanning into black metal and even drone sections, Ba'al are fierce, ambitious and promise to be collectign scalps soon. Having witnessed a few of their first performances, we had to speak to vocalist Steffan to find out more...

Mike: You've recently moved to Sheffield, how did Ba'al get going so quickly and has it been what you expected so far?

Steffan: Well in fact it wasn't as quick as you might think. I moved here in February of 2015 with the intention of starting a band, due to the city's reputation.

It actually took around 9 months to get anything solid going really. We started as a two-piece, just Nick and I, then 3, then 4 and now 5 members. Had a swap of drummers and now the adding of a bassist makes the outfit feel a bit more solid.

In terms of expectations, I think you and I both know that it will never be what you first imagine. Too many different influences and backgrounds for it to stick to a standard idea. But I'm chuffed with what we have brought to the table and I'm looking forward to see what else we can conjure up. I'm pretty sure it's going to get a lot heavier. 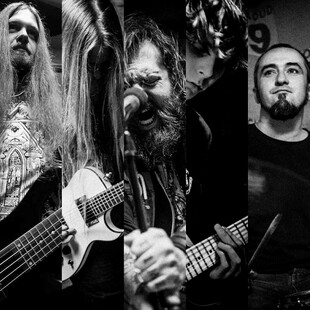 Mike: Cool, where's the name from? I have a vague idea that it's somehow Lovecraftian or refers to spiders? Enlghten us!

Steffan: It's used in many forms, but where I place it is from an old Canaanite god, which is now pretty much an non-practiced religion.

There's many tales of him in history but I like his attachment to Beelzebub. People at one time were burned or crucified for worshipping him.

It translates from Hebrew as 'Lord' and beelzebub being the Lord Of Flies.

That'd be the short story anyway.

Mike: Interesting. What kind of influences are you taking for this band that aren't musical? (We'll come on to that)

Steffan: For myself, it's my interest in folklore and religious occult history. As cliché as that is these days, I think it's fair to say that lyrically that has a huge part to play in our music.

Aside from the music itself, it has to be my involvement within live music as a promoter, punter and collector. Doom/Sludge/post metal, which every sub genre we lean towards has played a large part in my recreational time for some years now.

Mike: With Ba'al's music, so far I can hear a strange mix of black metal, doom and some of the more extreme metal that was around in the early 2000s, possibly Relapse Records stuff, what are bands all five of you can agree on?

Steffan: I'm glad that comes across as it was that era that really influenced a lot of us. I'd say the 5 bands that we take most of our influence from are: Cult Of Luna, Amenra, Neurosis, Isis and Downfall Of Gaia.

Later at live shows you'll begin to see more of their live performance influences too.

Mike: Excellent, it's obvious you lot are on the same wavelength as a lot of bands at the moment, there seems to have been a resurgence in truly heavy, yet artistic metal. However, do you also feel there might be a simplistic kind of sludge/doom metal rising up? One that takes its influences from a dumbed down, ultra-safe area of the genre? 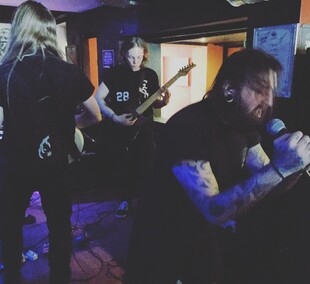 Steffan: I think there are so many different bands these days that there is a fear of "blending in" because let's face it, theatrics have been done a hundred times over. But we wish to bring more than just a good live gig to audiences. We want it to be a sensory experience also. Audio, visual and physical.

I'm a huge fan of the simplified sludge scene as you'll know cos you've seen me at your shows. And to be honest I don't think it's a safe zone at all. It takes a lot of balls and talent to get such a huge sound from such a small line up. Whether it be instrumental or with vocals, I like to just close my eyes and sway away to the hypnotic nature of it.

Mike: Good point, let me put it this way. Have you seen any hint at moving backwards in metal lately? Attitudes to inclusivity for example? There's been some high profile clashes between left and right when it comes to politics in black metal recently, do you think it has a place in music?

Steffan: I think attitudes towards other sub genres have been around since day dot. But there are so many that you can just get on and ignore it. Myself? I'm quite naive or maybe even ignorant towards it. I, like most people, just get on with my shit and enjoy doing it.

Personally I'm met with my own critiques but fuck, we're all metal heads at the end of the day. I think the world in general is far too judgemental.

On a more positive note, what bands are you excited about at the moment?

Steffan: I think we can all agree that my boys in Conjurer are smashing it. Definitely check out a Brighton band called Somelle who have a 2 track free download on their bandcamp, it's epic and we've spoken about a split with those guys.

Under, Boss Keloid, Slabdragger, Mower, Nomad, Wren, Soden have been my live highlights this year. The scene especially in the north is the best it's been for a long time.