Bright Curse Before the Shore 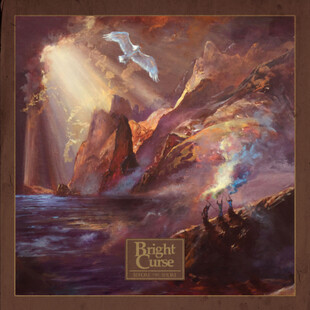 A trio of French expats living in London, Bright Curse have been a welcome addition to our national retro/stoner/proto-doom scene. And with tracks such as The Shore, they could soundtrack the Remain campaign as a reminder of what our bond with mainland Europe brings to this island.

Bright Curse obviously genuflect toward their Sabbath, Purple and Floyd vinyl, but there's a more modern hint that suggests that Before the Curse is a metaphorical pilgramage to Gothenburg and Orebro, the Swedish homes of Witchcraft and Graveyard. The Shore holds strong reminders of the early albums of the latter, bursting from the steady, peaceful, if possibly melancholic, with a flourish resplendent with flair magnificently.

The latter can be heard with nods toward Magnus Pelander's distinctive vocals, such as on the also excellent Walking in a Graveyard (Bloody Witch). Solos that would be classed as willfully overblown if not cut short, share with a delicate psychish tranquility and a rocking chorus.

The album has a few real highs, but the rest, while not flat, are merely enjoyable without raising the pulse, stopping this from being a great album. None the less, everything clicks, rare quality vocals and stirring musicianship create an album to cherish, its heart borne from half a century ago, of rock rememberance, of joyful music.

Forums - Reviews and Articles - Bright Curse - Before the Shore