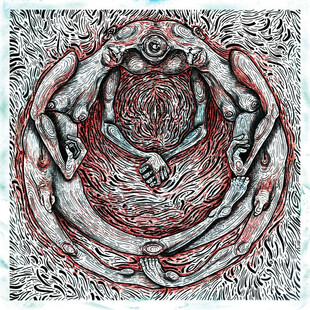 Heads down, lights down low. It's a primeval murk that sweats from this one. Not unlike the recent outpourings we've seen from Oranssi Pazuzu, Teorema play sludge that's framed totally in black.

However, from the get-go there's something other-worldly about these Mexicans. Sure, there's a monolith-like crushing to proceedings, but there's also some moments of emotion sliding in there. Witness the solitary picked-out atmospherics of opener Herencia for proof.

Elsewhere there's a paced, frenetic groove being pinned down with deathy vocals on the rip-roaring Damned Country that almost calls to mind Entombed at their most blunt.

There's a wave of bands at the moment making an impact by overpowering the listener with volume and technical mastery being equal, but somehow buried. Teorema are one of those bands. The levels here are delivered so loud it's as if they don't want you to hear how great their riffs actually are. No bad thing, the blunt force trauma is not unlike being clubbed about a bit. Some people enjoy the punishment. The balance is right in this instance.

For some truly head-nodding euphoria, get acquainted with the noodling Spiritual Madness. Like peering into an evil kaleidoscope in slow motion.

At times, Teorema goes a little 90s hippy. Think Ozric Tentacles gone Neurosis, if such a combination could happen, this band may well be the result. Take the opening trippy section of Fuegos Fatuos for example, all blacklights and posters of wolves on the wall before it explodes into dark, sticky sludge again.

A band of variation, Teorema deserve your attention now, dip in.