Hey Colossus All The Humans (Are Losing Control) 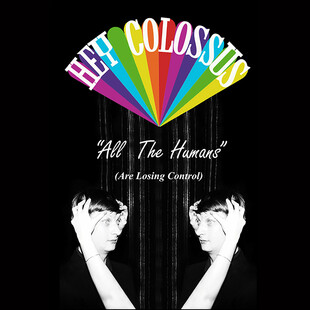 Three tracks on tape, nice. Hey C do like to throw you a curveball now and again. After last year's double whammy of LPs, we've seen the band become that little bit more prolific of late. A split record with old 9hz faves Hotel Wrecking City Traders preceded this, so it appears they've hit a little seam of creative zest and increased output.

This neat little release brings a laid-back and blissful title track in as an opener, with lyrics seeming to fall into the tripped-out and lackadaisical end of things. It's got that elated feeling that last year's excellent Radio Static High had in droves and lays it on thick.

Similarly, the bleep-infested start to a reworking of last year's album track Black and Gold sends shivers down your spine. Muted and cool, it's as if the track has been suspended in boggy water, with shamanistic caterwauling and synths leaned on by unseen hands. Similar to Teeth of the Sea's reworking of the Evil Blizzard staple Sacrifice from their Rocket Recording split.

An improbably-shaped and 11-minute version of Wired Brainless from the same album from 2015 sees them entering Acid Mothers Temple territory. This comes complete with digital waves, flangey samples and that same drive they pulse through everything these days still there, but in a Breaking Bad, scorched desert kinda way. There's a sense of raiding the music cupboard at school to this one, whistles, parps, clicks and chimes pepper the underlying, shimmery belly of this one, almost reaching Sunburned Hand of the Man levels of childish nonsense. It's good though, great to hear a band exploring their tunes from a completely different approach.

You can get this on cassette, but be quick, there's only about 50 being dubbed.