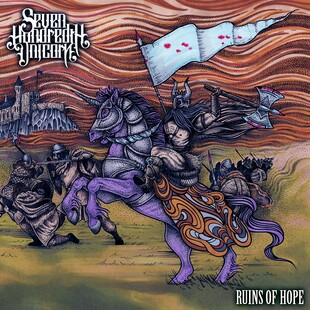 With that name and a camp Conan album cover art Groan would be proud of, Seven Hundredth Unicorn certainly jump out at you, before you've even heard them. Then, when you do, the music goes even further, a vivid concoction of styles played with verve and energy that instantly has you on their side.

Hailing from Milton Keynes, 'Unicorn are a mere two piece, blasting away at the limits such a set up could impose to the point where they're practically ignored. Our World Collides greets you first, a rollicking, early Baroness style bravado creating a full boisterous impression. Hear No Evil, See No Evil continues, sludge mentality allied to hardcore velocity all the time training a keen eye on Mastodon's catalogue - as such, at various points across Ruins of Hope I'm minded to compare to Scots Dvne.

The album is long for a band so young - ten tracks, the majority passing the six minute mark - indicative of a band bristling with ideas. As well as the bold doomy swagger and Mastodon influence, there runs a regular large post-hardcore, screamo, emo - hear it as you will - streak, scorching a brand through the centre of the record. The excellent Time Waits For No One showcases this perfectly, switching from this to fast riff splendour gratifyingly.

There are brief flickers of further influence input - the grand boldness of The Sword's Age of Winters possibly working its mysticism in the album's DNA, or the Isis-ish intro to Death of Glory in the Serpent's Eye - but the headline statement that is dictated is not one of a sound indebted to more established peers, but of a band's audacious multi-tasking skill in turning it all into an album so immensly likeable. Recommended to everyone reading this - even the grumpiest of metal fan will find something to love here.