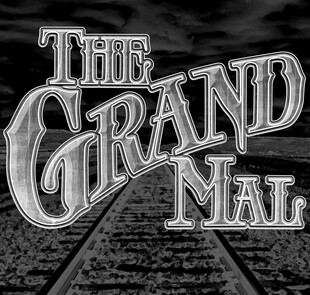 The Grand Mal are a new four piece from Oxford, all moonlighting from UK bands you'll know the name of at least, in Desert Storm and Mother Corona. Released from the active When Planet Collides, and as a short, pay what you like downloadable EP, this should be a no brainer for stoner fans of our isle. My issue, which delayed my delving in immediately, is that I'm no fan of either daytime project of the band members.

Yet, somehow, this surpasses both in addressing my tastes, the first track No Mans Land immediately tantalising. They carry themselves with a confidence, walking tall with a cocksure strut. The distinct vocals - distant echoes from 90s alternatives such as Les Claypool reverberate through more standard modern stoner stylings, with a touch of cheeky sass and attitude, not miles away from James Atkinson of Gentlemans Pistols.

It reminds me a touch of old British stoner rock - think Blackrock or Marshan as example. Then there's an obvious QOTSA / Desert Sessions influence on Black Spiral, a pointer to a truth that there's nothing wholly original here, but there's little room for such cynicism during the listening experience. Instead this is a surprisingly warming, distracting and merry release, and here's hoping it's not the last time the four members of the Mal converge.