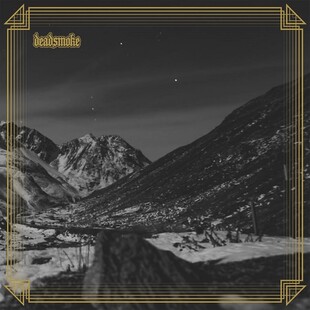 A new Heavy Psych Sounds release, this time from Deadsmoke, Italian sludge metal; for fans of Conan and Bongripper, so says the press promo. This preview, while promising, also holds a weary worry, a tagline familiarly seen applied to recent bands who excuse unimaginiative, uninteresting dirge with such comparions. And as this self-titled kicks off, with Branches of Evil, it is a worry confirmed - plod along sub-Cough slow doom; Bongripp-off. A brief break into an almost groove riff, and the odd psych effects offer only a glimpse of variance.

Yet as I stick with it, things become more engaging. Eyes of a Blind Man instantly improved, the riff vaguely kinetic so as to carry a momentum, not wallowing in a puddle, undeniably head-nod inducing. And then it goes practically stoner rock, leading out from the continued space vibes, a nice twist that ultimately makes for a truly enjoyable listen. Liar Behind Me continues the resurgence, more slow doom, breaking into less dense interlude, then getting better and better, a stuttering riff infectious, giving Deadsmoke an individuality, a worthiness through originality. This is very good all of a sudden.

Tornado loses the momentum gained somewhat, a largely boring instrumental sludge sound. Night of the Vipers attempts to gain back that ground, a colossal channeling of direct line to the forefathers Sleep, what it lacks in the imagination seen earlier it makes partially back through elephantine proportioned stomp.

Not the most original release you'll have heard this year, even within the close confines of doom, Deadsmoke suffer in comparisons to their peers when they play too close to their influences, lacking Conan's nous in how to manipulate a metronomic vibe so as not to become stale, nor the shrouded menace of, say, Primitive Man. But when they venture out alone it is done so successfully, bringing different inputs in they create an identity for themselves, one which is well worthy to be brought to the attention of a wider doom crowd. It's not breaking ground and is recognisable, but after a shaky start Deadsmoke really hit the target, with music that'll warrant repeated listen.