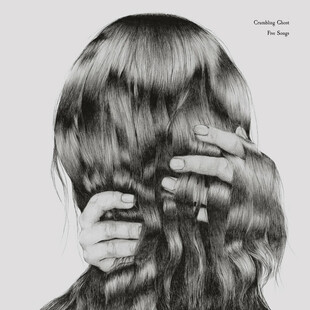 It is of satisfaction, due to my previous love of this band, that they have gained the horizon-expanding attentions of the likes of Tom Ravenscroft and Walter Hoeijmakers (head honcho at Roadburn, where the Ghost appear later this year). While perhaps not translating to wide-spread adoration to date, a new album may yet change matters.

The to-the-point, or unimaginatively titled (take your pick) Five Songs encompasses all of their attributes shown prior, yet brings new influence, new shades and aspects that rise the album above everything they've released before. More collections of common tread folk yarns are twisted and given aspiring, adventurous appreciation for us to be captivated by.

Five Songs dawns with Are You Going to Leave Me?, swirling but revved English folk, with more force than previous Crumbling Ghost output, yet maintaining that artistry they can routinely call upon. My knowledge of folk may be thin (ie not much beyond this back catalogue), but I'm still drawn in, Swansea Town evoking fond memories of Isobel Campbell and Mark Lanegan's collaborations.

The fourth track begins a completing couple of what are, I presume, original tracks, and here they really shine, maybe unlike ever before. The ten minutes of Lose and Get Something Good begins mellifluously, airily floated through, vocals whispered, "clawed from old age and death, a new lease of life", a promising lament laced with hope. When, six or so minutes in, the vocals dissipate, it ignites and you're brought into an Earthless-esque expanse of psychedelic possibilites. It is bewitching, an unexpected yet truly uplifting addition to the band's arsenal. I'm left grinning wildly. Maajun's instrumental jam ends things appropriately peacefully.

At once more direct than their back catalogue, yet also more pleasingly kaleidoscopic, with Five Songs Crumbling Ghost as ever provide a bridge between apposite musical outlooks that fans at either bank didn't even realise was possible, but now, more than ever, allows those same revellers to bathe in the journey and broadened horizons now acquiesced. For the open minded souls with optimistic perspectives, there's delight to be explored here.