Slabdragger Rise of the Dawncrusher 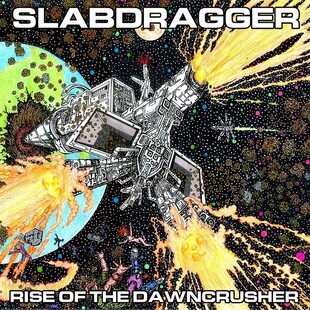 Slabdragger are ready to take on the universe. The album artwork may allude to a sci-fi theme, but it also could be seen as a gesture of a band without fear or limitation, emboldened and looking only to the stars. This may be a barbarous, pummelling record of decaying sludge, but it is also a confident and thus perversely joyous listen.

Five tracks in more than an hour, and not a minute of wasted indulgence to be found. There are grand statements yet frequent changes in tempo, the groove riffs that have brought them to the attention of many prior to this still there, altering the mood and direction often several minutes into a track. Slabdragger's other calling card of multi vocal styles evident from the off on Mercinary Blues, providing nice contrasts and illuminating changes, the track beginning with a nice fuzzy sludge pace, warming to Weedeater fans and the like. It burns brightest almost nine minutes in with riff-powered blasts of energy, although similar rewards are granted across the album.

Evacuate! is the only sub-five minute track here, exploding from the off, a harsher hardcore tinge, increasingly frantic towards its end, reminiscent somewhat of their vinyl split mates Meadows' methods. But this brevity is the exception, and once you're past it you are swallowed into vast tornados of mind-altering mercilessness until the end.

Shrine of Debauchery may shade the honours, epic, vicious doom, its magnificence measurable in how it compels your undivided attention from start to finish. We're talking top level doom here, worthy of an audience across and beyond our island. There's galaxies more to explore, to marvel at, before its over. Implosion Rites has an opulent, Yob-like vision, a natural pointer across the album perhaps, but most prevelant here.

Missing it may be the totemic, relatively short-blast 'anthems' of Erroneous Maximus or Murky Fen from Regress... but this isn't even said as a negative - the lengthy tracks are not here as a metronome endurance test of bleakest amp-obsessed doom, but so rammed with ideas and good old riffs that the rolling momentum brings you along with it. Rise of the Dawncrusher is as dynamic and engaging as you could wish from a sludge doom album. Exceptional work.

Forums - Reviews and Articles - Slabdragger - Rise of the Dawncrusher