High Priest of Saturn Son of Earth and Sky 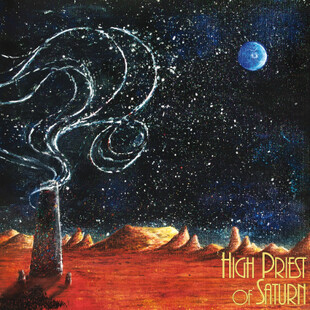 This is High Priest of Saturn's third release, their previous output offering satisfactory if not spectacular psych tinged stoner doom. The Norwegian's have however significantly upped their game here with Son of Earth and Sky. Giving full time employment to a keyboardist and centring their sound to the trippier elements have enabled a focus and definition that is a major draw.

Aeolian Dunes's spaced, cosmic zone-outs flow along on a cloud, while the transcendent Ages Move the Earth's grand openings melt to mellow dream pop keys and murmered vocal. The Hammond takes centre stage on the title track, and launches into full on organ wig out in fine Boston / Spiritual Beggars style on The Warming Moon, which otherwise is the most akin to their more directly alligned stoner past. The rawness at times makes it feel like a demo, but ultimately the unpolished production adds to the earthly yet astronomic atmosphere alluded to in the title.

The echo-effected female vocals and adept use of the keyboard will no doubt deal out the requisite Blood Ceremony calling cards (or for that matter Mount Salem or Electric Citizen), but it is never as direct, so maybe too worth the attention of disciples of the full on space-rock of Vinnum Sabbathi or Yuri Gagarin. An album to drift away to, whether during chemically influenced inner reflection, or just a lazy fade out to the land of nod on the sofa, its airy hypnosis eclipses any potential for boredom with a deft touch, instead creating moments of chilled charm.