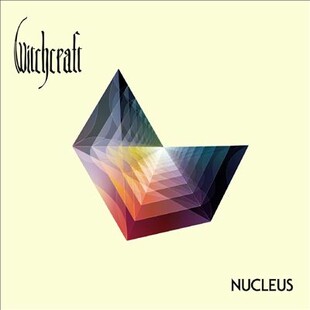 Legend may have been a solid album, but it lacked the magic spark that illuminated so much of Witchcraft's albums to that date, proved more so to me by the fact that, while I enjoyed it on release, I've barely thought to revisit it since. As such, Nucleus is important - can they recapture that indefatigable knack for a doom rock classic, or will it be a testament to a band no longer in the "special" bracket, permanently grounded from the mountainous highs of their first trio of albums?

It starts well, Magnus Pelander's distinctive voice immediately amazingly alluring as ever on the gothicly tinged Malstroem, the mood otherwise more the downbeaten outlook of recent than the occult frolics of Firewood. A couple of tracks later and The Outcast's flutes, obligatory Jethro Tull and Blood Ceremony lazy reviewer namechecks aside, hold a nice touch, and the old school doom of the suitably titled The Obsessed raises a smile.

Elsewhere it's thin pickings though, I'm afraid. Too much passes by without stamping any mark on the consciousness, and the fourteen minutes of the bloated title track are an ordeal to get through, an aimless entity where even Pelander's vocals begin to grate. There's plenty of "good" - more material that harks bark to the style of the self-titled masterpiece than almost anything since - but not much you'd call great, never mind essential - a high target for me to set but one they've passed with effortless ease on so many occasions previous. (There's also the matter of the lyric "Your stick is sticky" at one point, that needs some debate, but I'll leave for now.)

Their eternally linked kindred spirits Graveyard have lost their special touch of late too, but there seemed an inevitability to that that made my break up easier to take, but here I feel like I've lost a love close to my heart, part of me. And while that's way over the top dramatical nonsense - Nucleus isn't a bad record and they of course owe me nothing - I just wish I could report back on a rejuvenation of my passion, now lost.