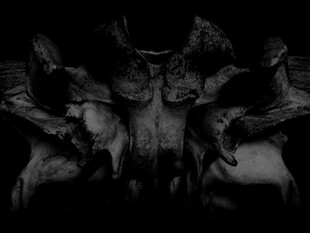 For someone who from my early teen years listening to thrash came to the conclusion I'd never "get" death metal, to as little as a year ago seemingly cementing that belief during the first Temples fest, I have to admit there's a chance I may have been wrong my whole adolescent life. I may yet embrace death.

It's only a fledgling feeling, but if I managed it with black metal to any extent as I have, then who knows what the future holds. This largely comes from being drawn into the extremities amassed within the first Dragged Into Sunlight album, but more so from witnessing Portal live earlier this year, a life affiriming fucked up ritual that shook my core and blew my mind. These may not be the most conventional narratives for the genre, but it's an in.

Altarage come in here most well timed, as, for as much as my untrained ear can tell, this is fair straight up Portal worship. How this will be received by die hards I can't say, but I like this, and the short two track entry means that overarching sense of honouring the Australians (which is the nice way of saying it) doesn't nag for long.

The same fuzzy warm feelings eminate here, the pummeling unrelenting drums underpinning every second, the vibrating resonance of the pulsating rhythms a barrage on the senses. This avantgarde blackened ten minutes a vortex, a black hole for all light, extinguishing any respite.

Captivating wave after wave of assault, I'm taken with Altarage. I admit this piece is naive in terms of critical review due to my lack of true genre knowledge, but if it brings it to the attention of those more in the know then check this out for youselves, and while you're at it perhaps guide me, with suggestions of where to go next, in furthering my delves into the world of death.