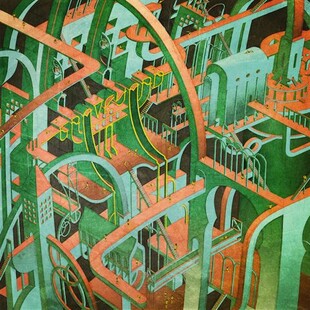 A new Graveyard album release should be a date to savour, to mark in your diaries, book off work and get to the record store early. Yet two differing pressures dampen that spirit, the increasing weight of expectation that now rests on each new release, and the fear that their rise in fame, particularly in their native Scandinavia may have softened their edges.

It's still a thrill to hear new material though, it's undeniable. Magnetic Shunk opens and is standard Graveyard material, nothing overly special, but still immersive and ever distinct. The next couple of tracks don't shine, but Never Theirs to Sell has that swagger allied to deftness of touch, that catchiness, that has always marked them out above their peers. Can't Walk Out follows, another high point, with a more restrained vocal delivery evident. Stylish points can be found within Cause and Effect and From The Hole In the Wall too, those of a band who have honed their craft.

There are more of the mournful-ballad type offerings along the lines of Uncomfortably Numb or Slow Motion Countdown - their inevitability lessening their impact, the faint whiff of cheesiness brought by the female backing vocals on prime example Too Much Is Not Enough more so. Stay For A Song is another, closing the album on a rather naff note. Elsewhere there are Graveyard-by-numbers offerings that are okay, but not much more.

There are some cracking moments littered across Innocence and Decadence, but they rub shoulders with a fair few lacking Graveyard's magical dust. While 2012's Lights Out saw a reduction in highlights from its predecessor, that's only really a reflection of how magnificent Hisingen Blues is. Here, the drop off is less easily written off. The sense of danger that has always given Graveyard their edge is somewhat lacking in the lesser tracks and leads to the inconsistency.

Some will find this irresistable; there is power in their delivery and immense talent within the band, and the sound has a purity of hard rock from bygone eras. Depending on your natural musical habitat, you'll either find this a damn fine album, or damningly just "fine". This is all in context of the expectation mentioned in my opening - I admit if this was a different band's debut I may well be proclaiming this to be a magical introduction. Yet for me, for now, (and I'll be giving it a chance to prove me wrong) it leans more to the latter, one I'll play, but not too often, a good but sadly not great record.