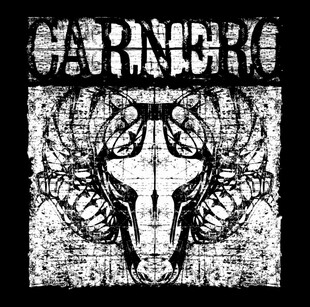 Stamping crust and math rock into one concise whole shouldn't work should it? One filthy, drunken genre that revels in sloppiness crossing itself with the carefully-timed and engineered? Yeah that's like wearing cut off jeans to a royal wedding, but somehow it clicks.

Italy's Carnero sound utterly scuzzy and pissed off, yet manage to throw in a Drowningman/Botch-ish sense of metalcore sass and focus. The songs come thick and fast, the vocals standing out as a wheezing, out of control mess over the stomp and bluster of a tight, yet utterly punk delivery.

The pace is set from the moment they begin and the energy is infectious. The lyrics are a mystery as they're delivered in their native tongue but they sound impassioned and the titles suggest a political bent. It sounds a lot like the desperate euro-emo of their countrymen La Quiete (a quick check reveals they are both from the city of Forli!), the mix of spoken and screaming styles making sure the message hits home as well as remaining noticeable.

This style is refreshing, Carnero have pushed themselves beyond mere boundaries, and it's a direct, invigorating listen.

If you're struggling to hear instantly engaging stuff that's both honed and authentic, these seem to be the real deal. Cannot wait to hear more.