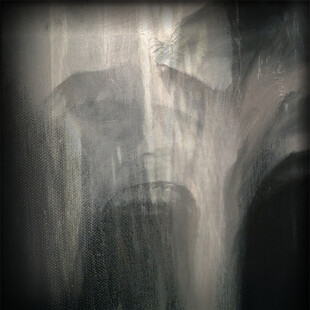 A cassette release of two up and coming Welsh doom bands from promoters turned label FHED here; a twenty minute split splitting-headache of disturbing sludge and doom that is highly commendable.

I've heard Tides of Sulfur before (well, a track (Sky Bastard) at least) yet more than once I have to check I'm listening to the right side of this split - my memory of instrumental riff centred doom not exactly matching what splurges forth. They've developed quickly, someone seems to have pissed on their picnic, as Lord of Flies is instantly darker, heavier and leant a menacing air with harsh vocals. It's not as if they've gone chest-beating, Crowbar-aping numbskullery either (like too many doom upstarts), the development in the black metal periphery. Their second offering is longer, and just as you feel it may drag thrashes about violently in old school blackened disgust, riffs rising. The production jarrs a little, it's a little raw around the edges, but it's overall impressive.

The Air Turned to Acid (a suitably doom name until you notice the acronym - TATTA - sounds like my elderly neighbour saying goodbye) are new to me but equally imposing. It only takes a few seconds for me to warm to them, their slow anarchic doom tyrranous in it's depressiveness. Sisyphus is a grand entrance for any band, and while their second half Glandroid doesn't quite match their opening, it is pulsating nonetheless. Yet another British doom band to add to the list of those to keep an eye on, and good work all round.