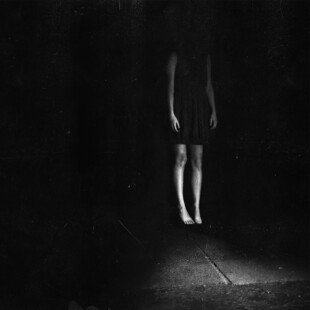 Released last year, now committed to vinyl, MMXIV was in my top 20 albums of last year, this re-release conveniently allows my to rectify the mistake of not reviewing it when I should've, as it deserves to have been wider recognised than it evidently was, looking back several months on.

Dark Circles' potion of crust punk and metal is executed perfectly as I'd imagine it should be presented, the all out fuck off aggro punk mixed with the sonic extremity of the the metal influence. Approaching it from a hardcore squat, as opposed to black metal graveyard, it is never ear bleedingly intense in the way Hexis or such folk approach, but it's heart beats to the same pulse. Not unlike contenders for last year's album of the year, Black Monolith, there are uppers within the sound that for the whole beats you down. There are moments that are beautiful to behold encased in it's own intensity and aggression, powerfully uplifiting in sounds of depravity.

Even at their most punk, the sound is never thin, a full on surround sound aural battery. There are pointers to compatriots Cursed, but bellowing their own Canadian imprint. It is a joy to behold - to sit back and let it overcome you to the point of submission. Its d-beat relentlessness more focussed, more energised by it's metallic brazeness.

To the point - this is a brilliant album, hitting a groove many seem to be aiming at but for one reason or another don't fulfill (be it stuck within one end of the genre to truly grasp the crossover appeal or just being shit), that ticks all the boxes you want from the music that is converging on combined sounds like this. And I realise that may sound a little contrived, that MMXIV could be a formulaic stylised amalgamisation of current trends. If so, then I couldn't have given a more wrong impression, as this is furious, no bullshit hardcore that blazens it's own path forwards, bludgeoning with focus and intent, that is glorious to absorb.