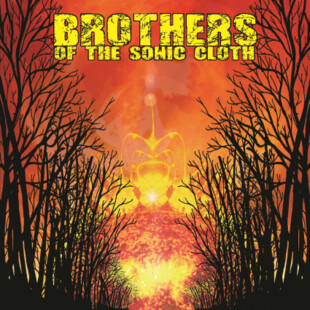 'A persistent thudding body punch of sonic destructive force' suggests the overblown press that arrives with Brothers of the Sonic Cloth's debut. While this is true, it must also be suggested that this album has appeared as if from nowhere and is already receiving universal thumbs up all round.

When you realise the brain behind this sound is none other than Tad Doyle, the brute force behind TAD and Hog Molly, it's easy to see why you could simply review this by repeating the word 'riff' over and over. However, while the 'r' word is strong with this one, the overall feel is one that skirts post metal and even the lofty recent work of Yob in its scope and surprisingly vast influences.

There's no sense of churning out the derivatives here, nope this is the bespoke tailoring of metal here, all at once heavy, rhythmically adventurous and mind-warping. The drums pound out obtuse and skittering prog-led patterns where others would have stayed close to the grain and as a result, songs like the fearsome La Mano Poderosa which lurches through almost a dozen stop-start moments, meaning that when it chooses to curb its way forward like some doom metal combine harvester, you are caught in the blades and thrown out the other side in ribbons.

Even when producing flowing, liquid post metal vibes on I Am it has to be said Tad and co sound as if they have been a band for decades. This is a piece of work that demands more than a few listens to crack we fear, not because it's difficult to comprehend, but because it's so uplifting and ambitious. Tad's back, and he's coming for you.