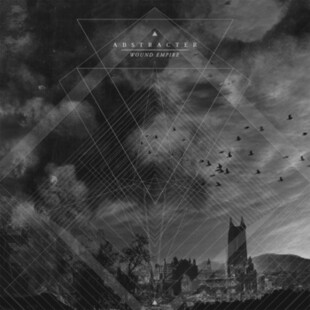 The world has gotten smaller, not in a good way. Sure we're all better connected, have better technology at an affordable price meaning our lives are easier, but for every gleaming iPhone or garden city out there, there's a war torn country, famine in a world where obesity is also killing people early and drought in a world where a good percentage of people buy bottled water instead of drinking it out of a tap for free.

So far, so sixth form meandering thought. However it's that hopelessness and helplessness that drives the music that Oakland's Abstracter make. A cursory look at their cover art for Wound Empire tells you all you need to know. The skies are turning black, is that pollution? Or beams of invisible wi-fi choking the air? Or is it a storm of negative thought to fuel the mad thoughts of conspiracy theorists? Either way, the music here matches the bleak first impression.

Abstracter deal in negative upon negative, with treacle-thick and churning bass and percussion carving up earth and stone for the feedback and grunting vocals to make an impact. You can almost see the black and white, bleached out camera footage of a bombed out city, the charred remains of civilisation laid out like market stalls.

To compound this, guitars on the harrowing Open Veins almost ape air raid sirens, as if they are inviting the incendiaries and a quick, painless death.

Mournful, moribund and flagging is how you'd possibly go on to interpret Cruciform, the sound of a truly evil-sounding demon slowly arching its back. The resolute and steady beat that rolls through the heart of Abstracter's music is a less fervent one that strikes out in the music of Amen Ra, but the grinding reality and sense of tangible frustration is definitely there.

Raging and powerful, it takes you over for the forty minutes it occupies absolutely.