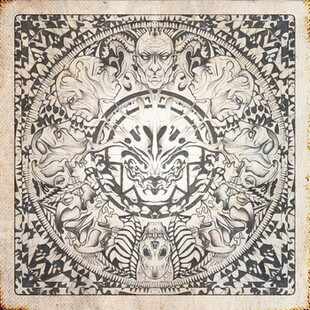 I saw a press photo of Formes before hearing them - two good-looking, serious and well-kept men at the front staring out, not typical of the great unwashed metally types we usually find attached to our review emails, but a second later your eyes draw to the third character, loitering at the back in a modern Nosferatu-style horror mask. It's unnerving and agitating, yet, with hindsight, an amazingly apt portrayal of what you are about to experience.

Formes played at the Liverpool International Festival of Psychedelia, and have shared stages with Mugstar and the Cosmic Dead, so I was expecting a tripped out journey to sit back and take in. What you are confronted with - and it gives you the feel of being stalked and in danger of iminent ambush throughout - is a headfuck of psych vibes rubbing up against extreme metal influence played from a jazz fanatics mindset. It doesn't always work, but it's certainly different.

The album even starts with a surprising near minute of black metal-lite blast on Through This Hole, before abandoning the threat into terrain more likely inhabited by the Velvet Underground than Darkthrone. It rolls along, so laid back that it could have a trip-hop rhythym at times, to the point near the end where you remember the opening in bewilderment - surely that was not the same song?

Yet this is nothing compared to I Am Nothing and Tumult, which introduce extreme metal vocals, aggregating the passage from light to dark along the lines of Gothenburg melodic death metal of Opeth et al, without that telling anywhere near the full picture. Where you'd expect the metal to be that of the stylised modernity - Deafheaven for example - it in fact holds a reassuringly old school flame.

The two extremes of the tracks aren't always seemlessly interwoven - as if magnetic poles forcing space between. It creates weird and distinct phases and passages, on the whole that doesn't jar, although can mystify. Elsewhere it is reined in, I Will Make You Ill and the acoustic first half of Smile Club, eerie and airy in their relative minimalism, respectively.

Maybe I've been too swayed in my prejudgement of what I expected of Formes, that I can't see them for being simply a metal band with a touch of the avant garde about them. This may well be true, but even still the quirks remain, and they are smile inducingly enjoyable. Is it just for the novelty factor? Possibly - I'll no doubt find out in the next couple of months, whether I'm still listening to them or not. Either way, as alluded to earlier, Formes have created something which sounds different, and pre-conceptions or not, takes you by surprise, a rare achievement and one with which they can be proud.