Fucking Invincible It'll Get Worse Before It Gets Better 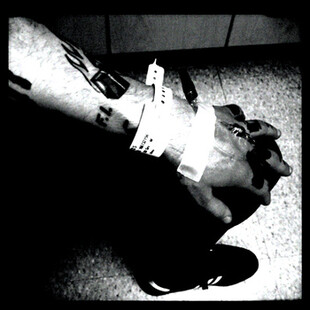 Need something to smash your head against the wall to? Y'know to really kick 2015 off to a bloodied, frustrated start? Fucking Invincible are the band to do it.

With over-clocking amps and the needle firmly in the red, this sounds like a group of friends just turning up and having a blast. It just so happens this bunch of friends are made up of some of Providence, Rhode Island's best hardcore bands. Members from Dropdead and Daughters seem to be channelling those raging 7"s from the 90s that marked out a new, snotty and grind-informed breed of hardcore.

It's all there, from the majority of songs that barely scrape a minute, to the spoken word film samples and unrelenting blastbeats and screaming vocals. It sounds like the equipment used to play and record this has been condemned, mics held together with duct tape and hope and amps that are shaking the corpses of long dead spiders who nestled in there when Bill Clinton was still in charge.

If you need to feel that sandpaper-rough feeling this early in the year then stick this on, instant rage pacifier. If not, steer clear, it may well ruin your day.