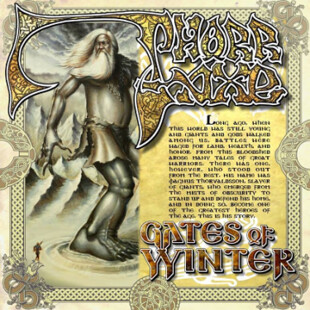 Looking at the fine upstanding trio gentlemen who comprise Thorr-Axe, you couldn’t believe such nice young men could cause such a racket. Looking like clean cut young college men who like Slint and joss sticks, they sound more like a combination between a Viking stag do feasting on raw meat and a hungover manatee with strep throat.

Both are excellent attributes for a career in blackened doom stakes, but imagine if those self-same college men had a deep un-ironic love of Dungeons & Dragons and ancient myths. Naturally Gates Of Winter isn’t as po-faced as your average misanthropic crunchers; the members of Thorr-Axe gleefully help themselves to heavy metal influences like The Sword to mix up Four Hooves and Mountain Crusher to mix in with the methodical monolithic poundings and a knack for writing catchy riffs that Amon Amarth seem to have forgotten of late.

But that’s not to take away from their reason for being – massive slabs of heavy guitar. The title track lumbers with frozen limbs like Jack Torrance in The Shining, with a similar spine-tingling animal roar to back it up, with the closing Awakening pounds the point home with a Crowbar-like violence pounding Eyehategod with a stone club to the point of near-death before it rouses itself for one final attack.