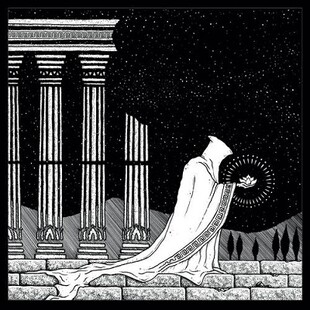 Lotus Thief are a San Fransiscan duo, made from members of avant garde black metal floral obsessives Botanist. Rervm is an album that captivates immediately, a mix of gothic and psychedelic uplifting where you feel there can only be bleakness.

Aeternvm begins with gentle, female vocals, before what appears to break to Deafheaven-ish enlightened black metal, the drum pattern in particular more forceful than feels natural to the track, but it contains no menace or darkness, a gothic metal song flowering out of the other side. Not seamlessly interwoven in style, it is rough along the welded edges of adjoined styles and moments, but not as a criticism (and presumably wholly intentional) - it makes for an engrossing leftfield listenening experience. It has a long lead out of gentle space-y bleeps and owl hoots, as though gradually falling asleep in the wilderness under a starry sky unpervaded by urban light.

Miseras lurches through the prog psych dry-iced atmosphere with some healthy rock riffs, before again downing tools over two and half minutes from the end, as before. It gives the album a surreal, unflowing project feel but in a positive way, as if you're there with them, recording it out in the woods, pausing between tracks to take in the surrounding nature. It may sound like an over-indulgence too far, but it is powerfully involving, and is a feature of the majority of the tracks across the album.

The gothy, slightly doom-ish air maintains throughout, the vocals ethereal, reverberations of the haunting melodies of SubRosa here and there. Your mind wanders to Ides of Gemini, or perhaps Royal Thunder as potential pointers of where this lies, but it is in the jittery, slightly off-kilter moments of recording, such as at the start of Discordia, that it removes itself a step from the norm.

Artistically conjured, Rervm has a mesmeric gravitas owed to it by its off centre approach to even the most standard of tracks that ensures this is an utterly compelling and enthralling release.