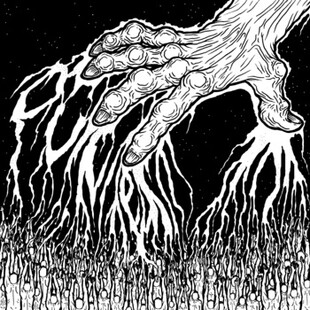 I came to Dune's Progenitor completely by chance, and in one of those happy coincidences found I loved it immediately, their hybrid of myriad metal genres done so bewitchingly. Finding Aurora Majesty in our review inbox was a nice surprise in itself, but I'm armed for the Scots return, with this two track CD released on Sea of Corruption.

It's instantly clear that they've lost none of their knack for creating huge metallic monstrous songs, and more than that, they've got even better. Into the Traveller's Halls adds a harsher edge, almost blackened vocals, while their customary bulky sound with lots going on in layers of guitar assault is present, the whole track wearing a full metal jacket.

There's a heavier doom leaning here, on the breakdown of the opener, and then in the introduction of Of Blade and Carapace, casting a darker shadow than previously. It sounds better for it, threatening and aggressive. The Mastodon style proggyness runs through the second track, especially in the tappy guitar which slowly evolves, building epically into a huge heavy riff ending.

Too short a release can be my only complaint. Stunning, definitely. Majestic, most certainly.