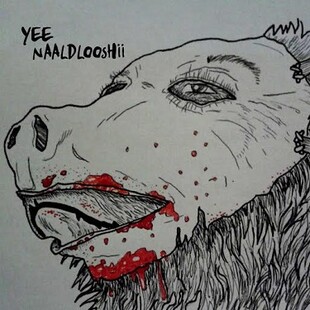 A split release usually means two or more bands contributing a piece of music each, sometimes they might cover each other's songs or have a common theme but what if the bands actually split themselves up and formed new bands all on the same EP? Pretty meta hmm?

That's what Kent bands Bear vs Manero and Frau Pouch have done here and the results are actually much better than the self indulgence would suggest.

Both bands contribute a track 'about' the other to begin with, but where the real fun begins is when members of the two bands are drawn out of a hat and placed together, sometimes not even playing their usual instrument of choice. This wife swapping party of a record is therefore pretty ramshackle at times but adorably so.

Each mixup band is given a mutated name, 'Frau Bear' for example produce a repetitive stonerific tune that sounds simplistic and muddy, not unlike a baked Melvins jam recorded from under a pile of jumpers.

Other attempts like 'Manero's Pouch' ditty The Birth sound atavistic and primal with barely any melody meaning it's stark.

The camp Media Circus by the four-piece iteration 'Frau Manero' sounds like 90s britpop also-rans Bis at times, while also cutting through with some pretty noisy Sonic Youth vibes.

It's all very confusing as to who is playing what but it strangely manages to sound like the same band all the way through. The slow bubbling riffology and sample-dominated Bear Witch by Bear Pouch is a great example of improv just working.

This is a fantastic experiment by two clearly creative bands, who are apparently attempting this live soon. That will be a spectacle, possibly one that will defy expectations.