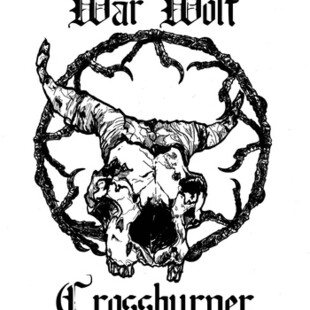 Headless Guru have brought together two raging bands on tape that threaten to burst out of the flimsy plastic confines this medium offers.

War Wolf, a hardcore band with more than a hint of the rage of Cursed or the blunt trauma of Benumb to them open proceedings with some pretty heads-down brutality. But it's no numbskull pit fodder they are offering, sure you can see chubby tops-off douchebags slamming to it, but there's more going on than simplistic anger. Witness the feedback-drenched end to Obey for example, which rivals some doom bands for volume and amp torture.

Turn the tape over, no doubt with trembling hands, and Crossburner enter the fray with some terrifying blackened crust. If this were playing in record, you'd have to double check you were spinning it at the right speed, such is the velocity of Diseased Youth. It's all double kick battery combined with metallic breakdowns, multiple layers of guitar creating a misanthropic sound to match their name. Even when it slows down, it still sounds fucking evil, down to the last ring of feedback, whistling alone.

The intensity on this side never lets up, the vocals in particular being mixed to the fore, rasping and hoarse, it delivers the apathy and anger in equal measure. There's many bands attempting this fast and tight approach to hardcore, but maybe few can pull it off with such fervour.