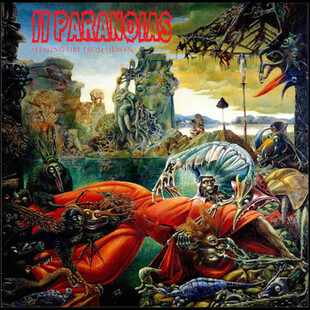 Some doom records we are sent these days sound like they weren't recorded in modern times. That's not to say this latest psychedelic pillar of sound from 11PARANOIAS is unoriginal or even borrows from the past, it just sounds like its been dug up and pressed for release. So thick with dust is Stealing Fire... that each strike of plectrum on string, every arched bass note and every cathartic beat recorded practically sends clouds of choking fragments of the past across the room as you play it.

Featuring members of Bong and Ramesses, this was never going to be a speedy affair, but thankfully it's a mid-paced rather than glacial progress adopted. Apparently none of these seven acrid tunes were written before descending on the studio, but what is contained here is the result of improv, jams and a sense of musical union.

The piled-high majesty of Paranoiditude (Beyond The Grave) brings on visions of smoke filled practice rooms and the three sparked minds here hard at work. Lyrics improvised speak on consciousness and detached realities, all tropes of the genre, but when they are this well-delivered you can forgive them.

A portion of this record is all mysterious, hazy and quietly seething, the majority is euphoric (as much as doom can be joyous) riff showboating, but what's wrong with that? The earth-splitting At The Cursus is just towering magnificence, the cathartic and mighty tone waves emerging from this one are only matched by the elaborate and yet subtle percussion that adds to the tripped-out bliss on offer. It sounds like the world is ending on this one, but nobody will care when Armageddon sounds this great.

The Max Ernst artwork also lends a mythical, other-worldly aspect to the release. Coupling his images with the music contained within is a strike of surreal and enticing genius, this record is on an absolute and unobtainable pedestal. Listen and learn, this is the new true doom.