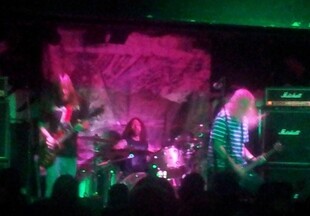 Tonight is something like my 16th or 17th time having the pleasure of seeing Fu Manchu in the live environment. They were the band that opened the door into stoner rock (and then on further) for me, back in 1995 - catching the video for Asphalt Risin' blew my mind at a time when mainstream heavy music was moving from the credible Sepultura, Machine Head, Type O, Roadrunner prime years to the beginnings of nu-metal, before we knew the ugly beast that would cast shadow on our beloved music. Fu Manchu at that time created some truly special, impossibly strong albums and have been touring seemingly annually ever since.

They're a treat to see too, heavier live than on record and with a monstrous back catalogue, they're a draw to me even though the albums are holding less and less appeal - to the point where I have't even got their latest Gigantoid.

A new album heavy set list is a pre-gig worry, but when they open with Pigeon Toe, probably their heaviest song ever, I'm hooked, fully pulled in by the Californians, and grinning widely that I'm in their presence once again. Despite the fact I've seen them more than any other band bar local/mates bands, I've barely seen them play it and it is a wonder why - it is riff heavy stoner perfection. The only other recollection is at Glastonbury 2000, a magical moment in my gig memories.

As it turns out there are only 4 or 5 of the new album, with the rest mainly drawn from the albums released between In Search Of... and 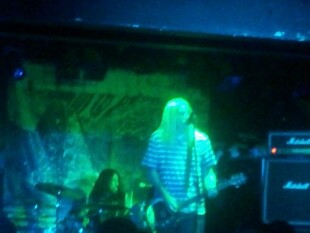 King of the Road. This allows for classics including The Falcon Has Landed, Evil Eye, Regal Begal and Mongoose. The selections from the albums post-The Action Is Go are the "hits", and despite me being underwhelmed by Kings... and California Crossing back then, time has soothed (if not healed) my apathy and Hell On Wheels, Boogie Van and the two title tracks blow all away, the crowd reaction boisterous in its glee.

Tellingly there little or nothing from anything after California... and before their latest, and when added together and viewed in retrospect it's an incredible, breathless and fun setlist that few could match for enjoyment. They pop off for a minute and when they return the consensus among those shouting requests (and myself) seems to be that Asphalt Risin' would be the crowd favourite, but it's better - they play their spacey stoner masterpiece Saturn 3 to end it on an even higher note. I'm transported back to Reading 1998, when they closed the festival (in the small tent) with this, again one of my happiest highlights of my gig going life.

This may come across as more a reminiscant personal account than a review, then I'd argue that's the beauty of gigs, they are experienced differently by everyone - but more so it's just the power of Fu Manchu, with their rich history, able to evoke some fond memories. Another great night, another superb live experience - I expect I'll go see them every year until they call it a day, irrespective of the albums they put out.