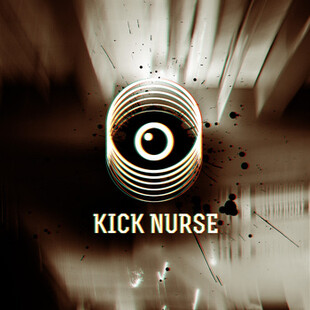 Kick Nurse are a messy outfit from Brighton. If you can imagine a cross between caterwauling off-kilter indie rock and a touch of Hydrahead records, then you'll get an approximation of their sound.

The vocalist has a Scottish accent which adds a unique bent to his varied delivery, hopping from a wailing that recalls that first Humanfly EP and perhaps Charlottefield to a spoken/screamed effort that could be Eugene Robinson if he came from Glasgow.

Second track Fist Bucket recalls Snowblood or perhaps a less film noir Enablers with it's creepy, twitching curtain/ paranoid neighbour stylings. The music snakes its way underneath in a similarly strange and slinky manner, meaning it's a menacing and stark brother to the opening salvo.

The longer, more brooding Swish Amish Knife builds on a sense of creeping dread and desperation as well as some pretty impassioned vocals that make the near-ten minute closer seem to pass too quickly. It's bass-heavy, punch drunk stuff that will appeal to those who like their listening that little bit more dirty, you get the feeling that followers of Planes Mistaken For Stars, Young Widows and maybe fans of Daughters will lap this up. Self-assured and confident if itself, the music of Kick Nurse bursts in like a drunken partner while you are trying to sleep, demanding attention, dribbling garlic mayo all over the bedroom, just brilliant.