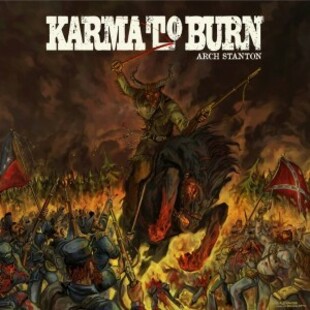 Karma to Burn have always confounded expectations, from the much charted dropping of their vocalist following an acclaimed, beautiful debut, to the less obvious but no less startling fact that they're still going strong, two decades later. While live they still prove an irresistable draw, I think it's fair to say that on record they haven't hit the heights, instrumentally, achieved on Wild, Wonderful, Purgatory and Almost Heathen (both pre-split up in 2002).

Yet despite this, and if you pretend for a moment the first album was by a different band altogether, they have always been and remain the best vocalless stoner rock band out there, inspiring others to explore the avenue (which isn't a bad thing considering the number of stoner bands completely spoilt by sub par vocalists) and producing the most listenable albums.

They've done this throughout by knowing that the riff is key. A good Karma to Burn song contains a huge blood-thirsty, heart-felt, played like they have no choice riff in the middle - without one, the songs mush into each other. When assessing whether Arch Stanton is a true return to form, then this is the barometer to assess by.

It begins promisingly, thrillingly in fact - Fifty Six is superb, akin to the magnificent 34 from Almost..., the riff sumptuous, I'm literally nodding my head like a moron in my front room right now. It's bookended well too, the opening Fifty Seven has a Wild, Wonderful... feel, while Fifty Three begins slowly, debut album reminiscent, before building excitingly to as fast a pace as you see from them.

It does drop off after the first three tracks, sadly, nothing terrible but then missing the key dynamic to make songs jump out you. The penultimate Fifty Eight is the exception, a rolling groove packed riff eventually kicking in that sounds a bit different from that before and keeps you hooked. That makes for half the album being worthy of returning to on a regular basis, and as a positive outlook kinda guy, I'd say that's a good return.

But is it a return to form? Well, yes, pretty much, (if you ignore self titled being their true form of course, but then that is an unattainable desire of mine), a couple of big riff moments short but generally it's back on track and up there with their second and third albums. Now for me to go see them in their truely electryfing setting - in the flesh - next week.