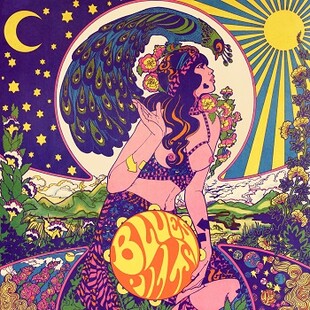 I must admit that when I first came across Blues Pills I was a shade wary, casting a cynical eye over what - for no fair reason - I thought could be a clean bandwagon sheen approach to what was then the fledgling proto doom sound just about gathering momentum and kicking up dust from the likes of Graveyard et al. The early tracks and EPs were good, but I never divested much time into what sounded very polished approach.

I came to this, their debut full length, doubtful but with a fresh blank slate mindset. And I'm happy and humble to say that it's an excellent album that makes a fool of my intial impressions. This is a sumptuous release, boldly produced but with songs that justify the clarity of attention.

The opening couple of tracks lavishly display their skill, 60s infuenced blues rock with powerful female vocals provided by Elin Larsson. High Class Woman feels like familiar fare of it's ilk, but the song is made in it's guitar solo and mellow moments that build, the song growing majestically. Ain't No Change is better still, a massive chorus that is endearingly catchy.

Unlike the great releases this year from Mount Salem or Electric Citizen, which on the surface may appear similar, Blues Pills are largely not darkened by a doom undercurrent, providing a brighter pysch-pop outlook. This is early Fleetwood Mac in it's reverence as much as, if not more than early Sabbath.

There are highlights elsewhere, Gypsy fondly reminiscing over Hendrix's more playful blues grooves, Black Smoke a Gentlemans Pistols-ish (minus the onanistic obsessive lyrics) rocking number, while River goes in the opposite direction, a blues mournful lament, Larsson's vocals impressively adaptable. There's a couple of lesser tracks towards the album's tail, but really I'm nitpicking to suggest it's anything other than fantastic.

A contender for album of the year, it may lack the occult doom that attracts many to the likes of Blood Ceremony or Sabbath Assembly, but this stands alone, proudly and boldly, an album of beauty, maturity and ultimately, superb songs.