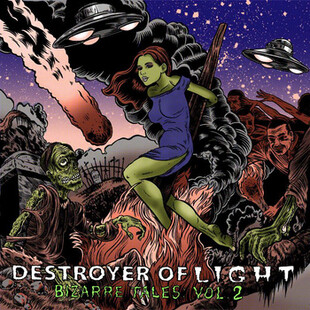 There’s a whiff of motor oil in the air, blokes much bigger than you are brushing past with cut-off denim waistcoats, the women look like they might eat you alive. I think you’ve crossed into the world of Destroyer of Light. These Texans take no prisoners it seems and you’re the next slave to be thrown into their prog/doom juggernaut as it crosses an arid, but colourful desert.

This record has been on rotation for a fair few days now, it’s one that’s full of invention, all crafted from various influences that make up a tantalising whole. There’s early Mastodon in there, but then there’s also a Kylesa-like rolling drive to it all too. That energy that piles things forward and on and on and to the end, wherein it all starts again.

Take Forbidden Zombi Ritual for example, all trot and chug one moment, almost a capella Alice In Chains the next. Doom also stakes its claim here too, the slow and deliberate movements of a beast that refuses to be tamed underpinning the elaborate sound here. The vocals strain from animal howl to tuneful growls. All you can really tell is that the awesome is cranked to ridiculous levels and you’d be a fool not to hitch a ride.

Lost Time is a little more slow-burning but gives the vocals time to shine. Here, they bring to mind former Alabama Thunderpussy vocalist Johnny Throckmorton and his heartfelt drawl, giving this a more defining southern feel. However it still feels like DoL have carved out their own sound, one that has equal parts proggish, beard-stroking musicality and crushing, doom-mongering chords that hang in the air like a bad stench.

The plodding and insistent Year of the Witch comes on like Earth’s more space-obsessed cousin, before exploring the same ground the likes of Black Sabbath’s War Pigs does at its more relaxed moments. This is where the stoner rock demons arise too, showing the diversity on offer here. I imagine this band have great difficulty in picking setlists, so strangely juxtaposed are the styles.

Destroyer of Light then, are more than worth looking into, Bizarre Tales: Vol II, (there’s no first volume by the way), is a great showcase for a band that sound fantastic whatever it is they put their hand to. This is more of a compendium of styles, more focus and they could truly be a force to be reckoned with.