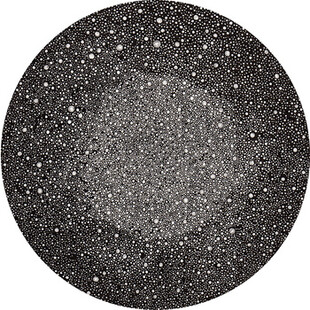 It's nice to be sent stuff I enjoy listening to. As I think I've mentioned before, I was running out of ways to politely say that while I appreciated the whole 70's inspired groove rock thing and could tell when it was being done well into my ears, I couldn't muster up a whole lot of enthusiasm for it. Black Shoals fits nicely with my fairly recent discovery that I had a penchant for black metal (and A-Ha, although that's not important right now,) and it's the forward thinking, non right-wing variety as well so double win.

A three piece consisting variously of members and former members of Acamar, Gorse and Hey Colossus (second loudest band I think I've ever watched, although still distantly behind Slomatics, as is everything that isn't a major cosmic event), Black Shoals sticks with certain original black metal elements in that the production is pretty disgusting and lo-fi. The guitars are mainly treble and fizz and there's either no bass player at all or it's sticking with tradition and recording it, giving the bassist the thumbs up from the control room and promptly deleting their track. It also sounds like it was largely recorded in a concrete basement with a handful of mics placed in a metal bucket, and as a result everything starts bleeding into everything else after a very short space of time.

One break from the norm is the drums. I'm pretty sure they're programmed and stay well clear of the constant blast beats you'd expect, other than taking the blast pattern and slowing it down as on third track, 1. Really, the only song that really begins and sticks with the established template is final track 5, the other tracks exploring the ranges of what's possible within the genre restrictions, 4 sounding like an evil, necro-clawing version of 9hz favourites Death of Her Money. There's also a handful of samples and computer generated instrumentation book-ending a few songs which sounds oddly clear and pleasant compared to when the band kicks in proper, but they aren't overdone and add to the songs rather than just stretch out the running time.

In short, I loved it and it's available for free download which you should totally be doing right now.

Look, do it here blackshoals.bandcamp.com