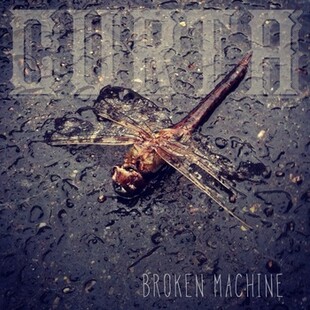 Curta are what 65 Days of Static would sound like if they released a rap LP.

The release in question, Broken Machine is this math-y avant garde hip-hop record ranging from upbeat bit-tronica to woozily sluggish, evocative downtempo introspection - all laden with tight atonal lyricism. It’s reminiscent of Clouddead but a lot more heavily electronic, Clouddead were also outsiders to the genre, geographically and stylistically- which I feel is applicable to Colorado self described ‘slacker rap’ duo Curta.

Broken Machine also has that post-apocalyptic styling and bleak imagery evoked in underground hip-hop classic The Cold Vein by Cannibal Ox, so lives on in tradition of avant garde hip-hop. As the record progresses it gets a bit guitar based, more overtly post-rock. If that appeals to you- (hip hop Vs post rock, a logical match) the missing piece of your musical jigsaw maybe? If so, give Broken Machine a listen, it might connect the dots, so to speak. Speaking of connect/disconnect, The emcee in Curta has a very staccato flow which is sometimes at odds with the beat and juts like broken glass through the blips which further lends this record a really unusual quality. It’s no surprise the lyricist behind Curta, aka Jake Danna’s background is in spoken word.

To me it sounds like a (re) interpretation of an early 2000’s style, like the aforementioned post-rock the production supplied by Brent Larson at points throughout Broken Machine sound like incidental music from an early 00’s real time strategy game for PC, it took me back there, it’s kind of weirdly mesmerising and I can’t really think of anyone else doing a similar thing right now in hip-hop or otherwise. As rap duos go, Curta are like the polar opposite of Sunday Down.

Maybe the self styled ‘slacker rapper’ is giving us exactly that, a soundtrack for our slacking from the state that legalized it.