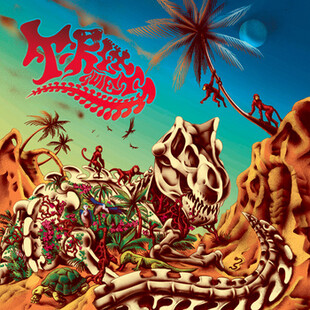 Here's something to get the ninehertz editor's blood pressure up - a review of an album not from my bulging to do pile, nor from the site's mountainous inbox. Sometimes however, your attention gets drawn elsewhere, and you just have to give in to where the music takes you. This is the true joy of reviewing - or being into a scene and listening to music in general - new discoveries that you instantly fall in love with. And so it was while reviewing a compilation album I came across T-Rex Quiet, impressed enough to feel impelled to check out in more detail, then further to review their album.

The track in question is Millenium Breath, a chilled, stoned stroll through golden dunes with friends on a perfect day where memories are forged and worries melted away. It is reminiscent, remarkably so, of Brant Bjork's solo debut Jalamanta, and while there's low marks for originality it's magical aura of relaxation is impossible not to warm to. The album continues along similar vibes - Don't Be Sad mixes it with the slacker indie cool of Swell, again with that narcotic haze blurring the tone.

The band's own tags on bandcamp, from which this is available for "name your price" download, include the descriptor "lazy" which is a nice self-deprecating way of describing the flow. The Milanese trio have conjured an album that I've now had on for days, that blows away the harsh winter cobwebs and raises a smile. Released in January this year, it may be a little early for maximum impact, this potentially being the year's summer soundtrack to sitting in the late evening sun, chilling out with friends and a beer in the garden.