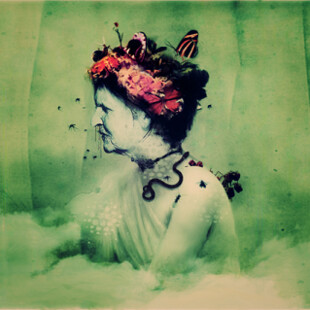 Empress Rising, the debut album from Swedes Monolord, is undoubtedly a fantastic record. Low end rumble doom riffs tyrannise the landscape, dominating to the point where vocals are overruled, used only sparingly and buried deep, all shrouded in a psychedelic haze that even has stoner rock connotations.

Opening with a twelve minute plus epic proves their commitment to the doom path. It's a corker too, impressive in an early Electric Wizard manner. The vocals really are low in the mix, to the point where it's a line or two in before you fully realise they're there. The vocal effect is reminiscent of Sleep, another blatant influence marker all round. The drawn out and occasionally repetitive nature of the riffs allied to the mystical vocals is at times mesmeric. The stoner edge is in the odd riff here and there, bringing to mind Black Pyramid for instance.

There is a problem though, and that is the frequency your mind is unwittingly drawn to the megalithic names of Electric Wizard and Sleep throughout, the obvious clout of two giants of doom the elephant on the room, casting a shadow of influence on the music and inevitably critique from listener. I don't need to state that these two bands, Sabbath aside, are analogous with the sound of much of modern doom, and an album that recalls both so dominantly inevitably is open to accusations of offering little fresh.

Still, that doesn't stop it being enjoyable, maybe just not thrillingly so in the way only a band plowing new furrows can. There are frequent moments of note - Harbinger of Death could be Eyehategod slowed down even further in it's opening riffing, while Icon is enticingly menacing, tempered only by the faint vocals. Their persistance to play a riff overlong is enchanting, the repetition and psych feel reminiscent of their compatriots Moon Coven, the doom version of their stoner.

I'm torn in how to summarise - likeable but overly generic, or nothing new but done very well? Essentially it's the same thing but for the all important emphasis. I suspect the majority of Holy Mountain and Come My Fanatics fanatics won't care at all, happy to simply lap it up, in much the same manner as Windhand managed to avoid similar accusations to be fawned over last year. Like Soma, and as I stated in the opening paragraph, this is a great record, and the hypnotic low settling cloud that engulfs it just about pulls Empress Rising through for me as an album meriting recognition as a doom monolith of 2014.