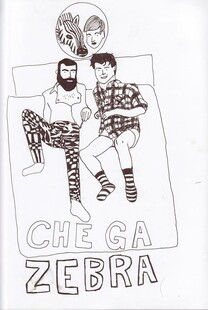 Che Ga Zebra, brothers from another uncle who’s really our dad. The house band of MADE’s partners in crime The Audacious Art Experiment tells us something we don’t know, you’ll never guess what...

Ari: How did Che Ga Zebra come to be?

Loic: Well Ben and I have a long, long history. His dad and his brother taught me how to play guitar and Ben taught me to be humble.

Ben: I taught him how to eat humble pie the right way.

Loic: That's right. It's all very well being good at guitar but if I'm too up my own arse Ben brings out the pie and forces me to eat it. He once made me eat my own words...they were horrid!

Ben: We've embarked on loads of waffy musical ventures together through our 15 year history, but it really took off when we started living in the same house.

We played music in the basement. I'd say we “jammed” but really we're both more interested in writing music than jamming out, as great as jamming is.

That's the key to understanding the Che sound. Daft attention to pointless detail with some semblance of a groove behind it. I'm digressing now...

Ari: You’re doing something that’s pretty different locally, who are your influences?

Ben: I think it's more, who are our anti-influences? A lot of how we used to write songs came from trying to avoid doing stuff that bored us about watching other bands. Not to say that we think other music is shite, but we both know what we like, we've been going to gigs for ages, and we both have short attention spans.

If you want a proper answer though, I'd say, Shellac, Mr Bungle and George Michael...I'd like to hear Loic's opinion before we carry on.

Loic: Yeah my attention span is well short. I've seen hundreds of bands and I zone out pretty quickly. Even when we're playing I stop listening after I've re-tuned four songs in.

Shellac, The Jesus Lizard, That Fucking Tank. Those bands always have my attention. George Michael, he's a genius too. What I'm really bothered about is grooves and beats. If I hear a band doing that well, then I'm ready to be influenced by them. 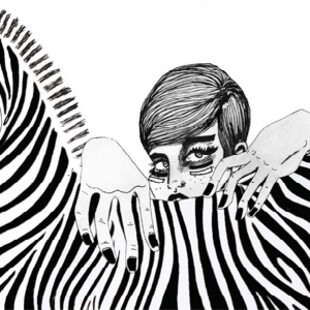 Ari: You describe yourselves as ‘Chris Rock’ on your bandcamp page, there’s definitely some groove and some jazz, how much of your music is driven by black music?

Ben: As much as pretty much all music you hear is influenced by black music...

Loic: In the early days of Che Ga Zebra, we actively tried to remove the African root from our music; it sounded a bit like Bach.

Ben: Just Loic on the harpsichord and me playing 'Greensleeves' on a pan.

Ben: I'd say we're influenced by jazz, but probably not directly. Jazz via however jazz influenced the rock bands we're into, maybe?

There's a Norwegian metal band that actually tried to remove any black influence from their music. I can't remember their name now but I'm sure it's easily Googled. It ended up sounding a) not very good, and b) still influenced by African music.

Loic: I think the jazz reference is pretty fair. It's not like we're going off on tangents too often. In The Pipeworks has a sort freeform jazz feel to it I guess, especially on first listen. It has some sort of A-B-A-B-C-D-E-F-G-A-B-D-G-O structure to it.

Ari: The live sets have a kind of improvised feel. How much of the music is made up on the spot?

Ben: Parts we write into songs that we know can be improvised. But we never do improv’ where I'm playing a solid beat. All the improv’ is played with a free rhythm. We mess around with sound in those moments.

Loic: It depends on our mood really and the vibe of the crowd. We have sections where we allow ourselves to 'piss about' a bit. They're quite important to us really because the songs, whether you like them or not, are pretty meticulously and well crafted. It takes a lot of concentration to pull them off well so when we have those sections of freedom I think we both feel really free. It's like an hour-long lunch break when you only are allowed thirty minutes.

Ben: It also helps us relieve any cramp in our hands we've built up during a song.

Loic: Yeah, I sometimes suffer from chronic cramp, one song in. Without the bits where we are free, our sets would last about ten minutes.

Ben: We're both falling apart at the seams nowadays.

Ari: Listening to the latest release ‘What Girls Want’, the lyrics are sparse and strange, what are your general themes built around?

Ben: Fuck knows! Well, I wrote most of the lyrics to 'Hollywood Owl', which were mainly paraphrased quotes from ‘The Wire’.

Loic: That EP was a while ago and we were still working out what was going on really. ‘Beach Bum’ was some sort of parody to a Beach Boys tune. They were always singing about surfing ‘n’ shit when none of them were that arsed about it. So we did some lyrics about surfing down Cleethorpes beach…which you can’t do. Hollywood Owl was, as Benny Boy says, lyrics from the wire. It was in reference to me being paranoid about picking up and some of the lyrics were directly from a text from 'Taxi Driver'.

Ben: Loic wrote all of ‘Beach Bum’ I think. The song sounded slightly “surfy”, so he just wrote down eighteen things that related to the beach.

Loic: Eighteen - it's a number that's been floating about.

Ben: Eighteen is a very special number for us. Tell him why, Loic...

Loic: It seemed a good number.

Ari: Ha! How do you think your sound has developed from your first EP 'Business Never Stops'?

Ben: We're probably not as afraid to drag bits out for longer if they sound nice/have a fun groove about them.

Loic: I've got more equipment. The songs have become more 'together' and I think we've just generally zoned in to what we are trying to do. Before we really had no idea. We just wanted to make sure we didn’t sound like Wooderson, who sounded like Fugazi. Now we play shows and people say, "Hey, you sound like Fugazi!" so I guess we've not developed at all.

But overall we're not as shy. We know now what tunings I like, how to use my equipment, how to use dynamics within the song and as Ben says, we're not afraid to enjoy the groove we've written. 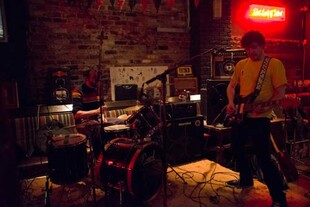 Ari: Now then, moving onto the pop-quiz part of the interview.

Ari: We’re going to play a game, “Che or Zebra?” You’ll have to try and guess whether the quote is from Che Guevara or Marty the Zebra from the Dreamworks’ classic ‘Madagascar’.

“You’ll have your side, and I'll have mine.”

Ari: OK, the first one you’re both…correct! From the first movie, ‘Madagascar’.

“I am not a liberator. Liberators do not exist.”

Ari: Correct! “The desire to sacrifice an entire lifetime to the noblest of ideals serves no purpose if you work alone.” Che or Zebra?

Loic: Well, I've never seen this film you're on about so if it sounds like Che, I'll say “Che”.

Ari: How can you not have seen Madagascar?! It's the one the rare times Dreamworks have got it right!

Loic: Again, that quote sounds like the great man himself. But equally I'm a huge fan of animals working together...kind of. Che.

Ari: Correct! Che or Zebra…“There's no fences, no schedules.”

Ben: Those were actually Che Guevara's last words, Actually if you look at the quote, it's grammatically incorrect and since most, if not all of Che's quotes would have to be translated by someone who does that sort of thing for a living, the quote would have been translated into correct English. I’m going for Zebra.

Loic: Well, if he was dying then his meekness is excused! Anyway, yeah Zebra.

Ben: We're not called Che Ga Zebra cos we saw some crap graffiti on a wall somewhere... this is our bread and butter!

Ari: Ha! Che or Zebra? “You have to grow hard but without ever losing tenderness.”

Ari: A spilt! Interesting. The answer is... Che!

Ben: We were doing so well. At least he wasn’t Googling, he could have been using Bing.

Ari: Che or Zebra? “Love has no boundaries.”

Ben: I’m off for Che again; he didn't end up in Angola by believing in boundaries.

Loic: Haha! It seems a bit meek again, but Spanish is quite a beautiful language, Che.

Ben: Why would a fucking zebra say that?!

Ben: They've got about fifty boundaries drawn on their daft fur!

Loic: Knowing Che as I do, he would had said "we're going to kill you"! So, Zebra.

Loic: I kinda thought we were a team! I've got that pie you gave me last week. Want a slice?

Ben: When Che Ga Zebra splits up, this will be looked back upon as the moment it started...

See Che Ga Zebra at MADE III this March 29th. Look forward to a long intro, songs they’re releasing in March. Plus, the promise a new song, it’s about four minutes so that might eat up some of that extended set!