Volume IV Long in the Tooth 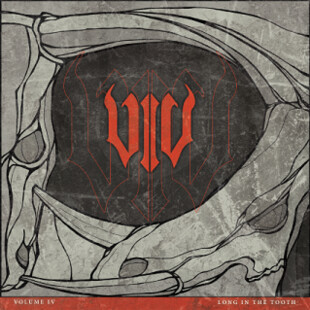 Hailing from Atlanta, it's not hard to guess Volume IV's preference for musical stylings from the name alone. Early listens to Long in the Tooth conjure memories of stoner rock past, of bands ploughing that southern stoner field with gusto and good time bravado. It passes me by somewhat to be honest.

Repeat listens reap greater rewards however. There's a darker element to Volume IV than I first gave it credit for, and the southern twang is not as prominent or domineering as initially believed. Not that there's anything wrong with that genus, but it has arguably been stretched to exhaustion. Volume IV develop their sound through a doom tinge, welcoming comparions to the dirtier end of Pentagram here, or even a less-metallic High on Fire (see Awake the Dreamer) there.

Opening with Looking Low for a High, there is a distinct doom tinge that gives the track gravitas, linking to Corrosion of Conformity, especially in their Deliverance period. Utero/Long in the Tooth is better still, the vocals passionate and desperate, lending further edge. There are a couple of mellower tracks interspersed nicely, Save Your Servant for example, which sounds like Chris Cornell's solo material.

Despite my initial apathy, this is a strong album, and a lesson to me to not be so hasty to judge. There are some generic moments approaching southern "boogie" stoner, but on the whole the darker ingredients concoct an individuality to the broth. Imagine Dixie Witch, or Sixty Watt Shaman haunted by the ghost of Sleep - for fans of Meteor City or Small Stone output this is recommended.

Forums - Reviews and Articles - Volume IV - Long in the Tooth