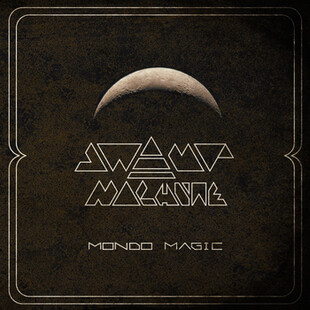 Swamp Machine are a new Dutch stoner/doom band (if the name didn't give it away) releasing here their debut album on the momentum-gathering When Planets Collide label.

Aghori Ritual is nice, broad and slow - carried along on a simple yet heavy doom riff, chanted vocals give the impression they've been listening to Conan a lot, albeit without as dense a tone as the Liverpudlians. It breaks into a period of stoner/doom, from the old school of 15 years ago where bands like the mighty Acid King traversed those sibling genres so well. Webs and Spiders takes this feel a step further, with a straighter stoner sound, although still in the mould of the brash big men rock of Orange Goblin or Alabama Thunderpussy.

Burning Road, not a Fu Manchu cover, does contain a nice slow, stoner groove but sadly drags thereafter. Gone begins with an entracingly mellow psychedelic doom intro, which evolves darker and heavier, braised on a dirty south US stoner sound, maybe akin to Beaten Back to Pure, drawn-out further to mirage the desolation of the most lowbeat of New Orleans sludge. Skull meanwhile takes us back and on to more trad doom ground, simmering and threatening but failing to truly ignite into the grand metal epicness they're aiming for. Battle Lost is a simple guitar line footnote, peacefully closing the album like a hot towel after a spicy meal.

Plenty of band names in the description above give pointers to the style on offer here, and whether it will be for you or not. It may also hint towards my issue with the album, that Swamp Machine need to forge their own identity, something that is lost somewhat down the gaps between the admittedly closely bound genres of stoner, doom and sludge as they flit across. Never the less, it's an engaging melting pot of influence from the sister genres we know and love, in need of some development but still an entertaining and worthy listen.