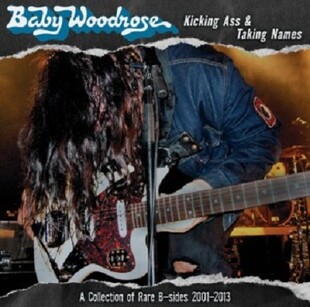 Kicking Ass and Taking Names is an assemblage of B-sides and rareties from esteemed Danish stoners Baby Woodrose, originally recorded between 2001 - 2013, to be released in March. Releases of this ilk can often amount to little more than curios for the diehard fans, a bit of fluff that will rarely be revisited. I can only think of Clutch's remarkable Slow Hole to China as an example that breaks that rule, but maybe Baby Woodrose's prolificity in terms of record output lends more to hope here, the song writing abundance perhaps wastefully discarding many a deserving track on the cutting floor.

There has always been a deep musical connection between Lorenzo Woodrose and troupe's sound and that of Monster Magnet, one that is unavoidable to mention in review. This is especially true here when it opens up with Information Overload, for all appearances a ringer for the title track from the latter's astronomically selling Powertrip album. It is still, admittedly, appealing.

The similarity simmers after that, save for Lorenzo's vocals unavoidably twinning those of Dave Wyndorf, a driver for so many of those comparisons. It's slightly surprisingly coy with the psychedelia throughout as well, delivering a concoction of 60s-70s pop - surf rock hints towards the Beach Boys, nods to Tom Petty, and an air of the Velvet Underground, although straightened by conventional song structure. Baby Woodrose aren't un-daring, but each song flows around a prominent chorus.

The nature of the release dictates that there is a fair share of padding, songs passing you by unremarkably, but with almost all the 14 tracks ending within 3 minutes, they're never left to outstay their welcome, and there are moments that stand above. Bubblegum sounds like the Clash, albeit robbed of it's punk edge, more a throw away summer meadow frolic than an essential rain hit London backstreet, while Here Today Gone Tomorrow injects some adrenaline to come across as a spacey take on the good time stoner of the likes of Priestess, very nicely.

It goes without saying that anyone interested in checking out Baby Woodrose for the first time should check out the established studio albums ahead of this. It isn't fantastic, with plenty of filler, but Kicking Ass... is more than just for collectors and completists, as any existing Baby Woodrose fan will find something in here to get their ears dancing.