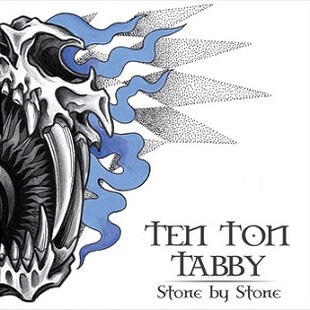 A name that has been bandied around the UK underground for a number of years, Ten Ton Tabby seem from afar to have operated in fits and starts. With the release of this EP this month, it will perhaps act as a springboard to more consistent appearance and propulsion onwards and upwards. On listening to Stone by Stone, it would be most welcome.

Ten Ton Tabby display a whole host of influences, bringing to mind many a name from 00's American stoner rock to classic NWOBHM, yet these fly at you at such a changing pace it's hard to keep up. The opening 9 - 5 is ridiculously stuffed full of moments and riffs. The stoner rock haze is that of Mos Generator or Roadsaw, broadening (relatively speaking, to those with an ear for the genre) to reminders of sHeavy, or even the posi-vibes of Bad Wizard, minus their tongue in cheek brashness.

The further you dive into it, heavy metal begins to dominate and thrust it's leather bound crotch to the fore, from the eighties and before. The fast paced sections of Ride on to Me or the big riffing Moon Rider throw out the big names - Iron Maiden, Black Sabbath, Thin Lizzy and more - as pointers. For me, the stoner enthralled outset offers the greatest reward, with its nods to both Grifter and Stubb. But it's all enjoyable, surprising myself as I normally can't stand a lot of trad metal, and well produced.

Generic yet oddly endearing, bold without being boorish, fun time stoner with substance and heavy metal licks galore - there's nothing new here, but it doesn't seem to matter. Anyone of a stoner or even hard rock leaning would be advised to give half an hour over to Stone by Stone.