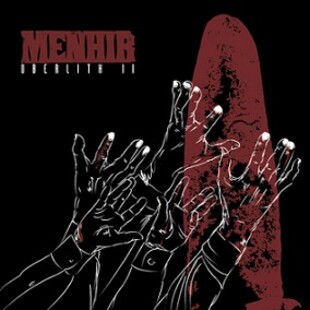 While reviewing the 100 song long Heavy Planet compilation, I began formulating a schedule of bands to check out further once I had reached it's end - further enlightenment being the the true joy of compilation albums. When halfway through I reached a track by Menhir, my patience snapped and I sought them out immediately. With their latest release on name your price download, lasting less than eleven and a half minutes, and released only last month, I thought I'd take a pause from the comp review to write this, as it is deserved of attention of it's own right.

The track in question is Mt. Aloha, a brilliant head rush of instrumental riffage based around lefty political samples. While I'm usually wary of the use of samples - too often used to try to distract from the blandness of the song itself - Menhir seem to take the samples as the starting core and write the song around it (noticeable in tracks from their debut, Uberlith also). It is overflowing with energy, a contagious and effervescent rumble.

Menhir are a Dutch trio, two parts bass one part drums, and not limited to instrumentalism either - the vocals that kick in during the ugly named Buttcake take you by surprise if like me you'd presumed otherwise after the opening. Dance Dance Dance opens with a bluesy country guitar line briefly, again leading with long spoken samples, now showcasing a southern rock stoner side - done well too I might add.

A happy discovery, Menhir are worthy of your attention - check out the bandcamp link below.